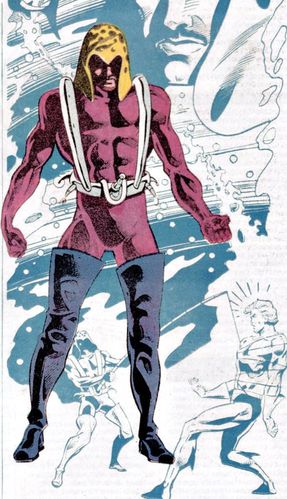 In the hustle and bustle of the city, Fisherman was a genuine urban crime fighter. Originally, he was a criminal, but his great dislike for losing changed his career path. His moniker was purposefully misleading. FACT: Bruce Dobbs was a fisherman, not professionally, but enough to call it more than a hobby. FACT: Dobbs was a persistent scrapper; he will, without hesitation, bite your nose off if you had a suspicious sneeze. FACT: He confounded his enemies by not using gimmicks or powers related to fish in any way, although his attire was all about fishing. He used guns. Every once in awhile, he would toss in a fish pun in his repertoire of “witty banter”. Things like “I do it for the halibut”, “Barricuda? You brought her?!”, and “Sorry for being so shellfish, here, have some of my fist, followed by a stream of bullets.” Later, he would give up the “witty banter”. So much of it got lost under the harsh repetitive rat-a-tat of his machine gun fire.